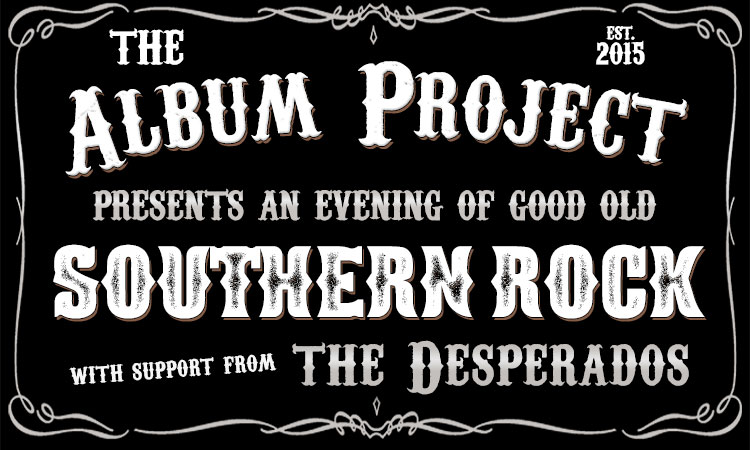 I thought I’d take some time to give you all a bit of background information into our recent announcement of our Southern Rock Gig in aid of Playhouse Theatre, Cheltenham.

Back in August last year we were performing at Agiotfest in Corfu.  In an afternoon of downtime we were all relaxing, beer in hand, watching a live concert performance by Lynyrd Skynrd.  Mark commented that it might be a good future project for the band as there were very few (if any) Skynrd tribute acts out there in the UK and that the band themselves were on the verge of retiring. Our going on hiatus put this proposal on to the back burner for a while, but Mark and I have since discussed it on occasion.  My only reservation was trying to sell enough nights to make the show a success.  Mark keeps reassuring me that it’s a sound proposal and I must say that I’ve never met anyone with a more comprehensive knowledge of Southern Rock as a genre than him so I trust his judgment. It’s not my area of expertise.

Forward to a conversation I had with Paul at the Playhouse re our future shows and possible dates going into 2020. He mentioned that they are always looking for ways to raise funds for the charity that runs the theatre and the idea was mooted about us doing a show to help out. The idea was discussed with a couple of regular band members and we decided that if we were going to do this then it had to be something where we could put a band together at very short notice, hopefully one where the players already know most of the proposed material and have a limited number of rehearsals to get the show on stage. By not focussing solely on Skynyrd as was the original idea, but instead looking at Southern Rock as a whole, then we knew we could find the players and put it together fairly quickly. The challenge we’ve accepted is to cause as much Southern Rock Mayhem as we can muster with little rehearsal time. I promise you it won’t be a fiasco, this is going to be a proper full on Southern Rock experience and the aim is to raise the roof on the place.

I’m pleased to announce that we are welcoming back some previous members of TAP to help get this show out, plus we are delighted to be welcoming a few new faces to the stage.  And the good thing is that only two of this band will be performing the 1973 show later in the year so it’s fantastic to be extending the TAP playing family.

We’re delighted to have The Desperados supporting us for this gig.  Another reason for us doing this particular show is because we knew we could make a proper night of it if we were able to entice them onto the bill.  I’m so pleased that Blake and the guys are going to be with us.  I hope to see many of you there, all of us supporting what is a fantastic cause.  The Playhouse is an absolutely amazing facility for the arts in Cheltenham and we’re so lucky to have their support in what we do.  The very least we can do is give a bit back to them.

Hope to see you in July, we’ll get the Jack Daniels out in readiness!

A Question of Copyright
Scroll to top
X